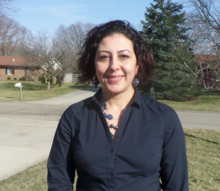 Roufia was born in Oran, Algeria, and studied Civil Engineering at the University of Science and Technology in her hometown. She began her career working in building construction, moving on when she had the opportunity to complete a yearlong intensive course at the Algerian Institute for Advanced Railway Studies. After completing her certification, she worked for the Algerian Railway System for four years, traveling to sites all over the country at any hour of the day. After moving to Dayton, Ohio in 2008 and subsequently receiving an Associate’s Degree in Computer Science & Software Development from Sinclair College, Roufia realized that she would not be happy living in the world of numbers and codes, so she decided to follow her childhood dream of earning a degree in French in the aims of becoming a teacher.

Roufia has made the most of her short career at Wright State. In addition to earning her B.A. in French in record time, she has served Wright State and the local community in many capacities. In spring 2015, she engaged in service learning at Horace Mann Elementary School in Dayton, where she supported her cooperating teacher by tutoring children with special needs. In addition, she enrolled in two French courses at Wright State with service-learning components, taking on leadership roles during the Annual French Immersion Day, where WSU welcomed 250 high school students of French for a day of French speaking based on the theme of the French Caribbean, and during “Wright State French Days,” an annual spring event where WSU French students give interactive presentations and French lessons in local high schools.

In addition to her service, Roufia distinguished herself academically, with inductions into two prestigious honor societies (Phi Kappa Phi and Pi Delta Phi, the National French Honor Society). In Spring 2016 she was selected to be a Supplemental Instruction Leader for Elementary French 1010, and took a course on language pedagogy, giving class presentations and tutoring students outside of class. Her presentation on Algeria included a mint tea ceremony and home made Algerian desserts, which transported students to her beautiful home country.

Roufia will be continuing her French studies at the University of Cincinnati, for a Master’s Degree in French. She plans to teach at either the high school or college level, where she will share her rich life experience and passion for French with her future students.