Celebrate the diversity in the Caribbeans

Our 2016 Spanish Immersion Day was a great success! On November 8, 215 students and 14 teachers from 10 schools joined us to celebrate the diversity in the Caribbean. Interactive sessions led by faculty and students focused on cultural etiquette, doing business in the Caribbean, Spanglish, trivia games, and learning to dance salsa and merengue. A special hands-on session led by the Spanish club involved learning about the humble Costa Rican coffee cart as a work of art and cultural patrimony, and Dining Services delighted us with a Puerto-Rican-themed lunch.

The dance performance by the local folkloric dance troupe Orgullo Mexicano, led by our own Spanish major Betsy Frías, was a big success, as was a fantastic Latino break dance performed by another major, Joe Pokorski. Everybody enjoyed the raffle and the traditional end-of-the day dance courtesy of DJ Megan Gómez of MEGA-Ntertainment. 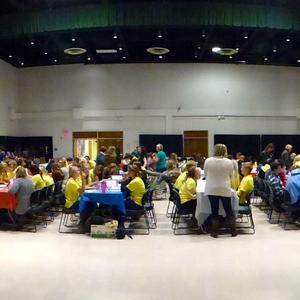 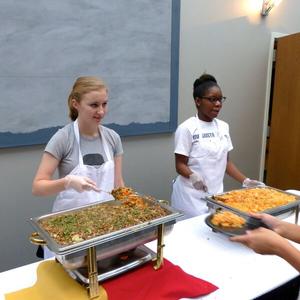 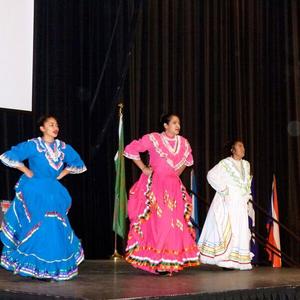 On Wednesday, November 19, 2014 in the Wright State Student Union our annual Spanish Immersion Day was celebrated with a record number of attendees - 307 high school students of Spanish III and IV! This year the theme was El Descubrimiento de Puerto Rico (November 19, 1493).

After being welcomed to campus by President Hopkins, Dean Sobolik, ML Chair Dr. Hertzler and Mr. Ortiz, Assistant Vice President of Latin Affairs, the students participated in several break out sessions led by Wright State faculty and students to learn about a variety of topics related to Puerto Rico such as: government, language, music, tourism, puertorriqueños famosos, the indigenous taínos, and dance.  Students had signed an agreement to only speak español, but those who were caught speaking in English had to serve some time in jail answering questions en español about grammar, geography, and vocabulary in order to be released.

The event ended with a fiesta of music and dance. 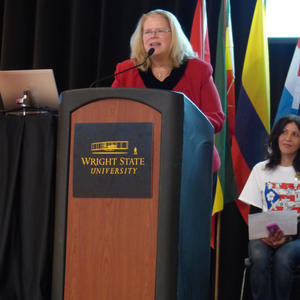 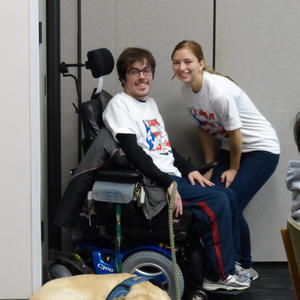 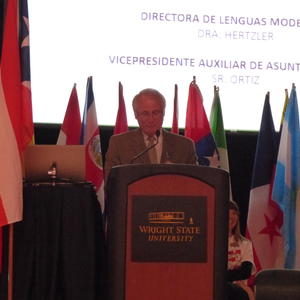 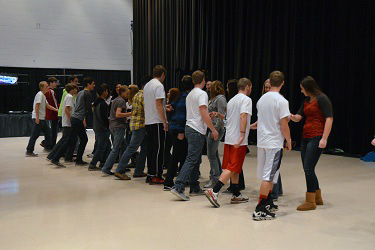 The theme was Viajar por el mundo hispanohablante.  On their journey, students travelled to: Argentina, Ecuador, España, México, Perú and Puerto Rico. They had the opportunity to dance and to learn about various musical instruments from Spain and Latin America.  Wright State Spanish majors and minors, the Wright State Spanish Club, and Spanish faculty members lead cultural activities in the target language for all of the high school Spanish students.

Any student, who was not speaking Spanish, had to go to jail.  In order to be “bailed out”, the students had to answer correctly three questions related to culture, grammar, and vocabulary.

The students were treated to an authentic Cuban sandwich from Boosalis Bakery and during lunch they were entertained by two Wright State students who performed various songs in Spanish. After lunch, DJ Megan Gómez, a Wright State alumna, provided music for the participants to dance bachata, merengue, reggaeton, and salsa.