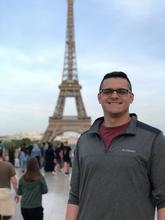 Michael graduates in the Spring of 2019 with a major in French.  He began as a declared French major and while in his first appointment with his French advisor who after a few minutes of speaking in French was told that she lost him at “Bonjour.”  Even though he was a declared French major, he had never taken a French course and did not speak the language, but he was excited to get started.  His advisor, Dr. Halling said that Michael is the first person she ever met to declare a language major with no experience in the language, and his strategy certainly worked for him!  As we flash forward three years, Michael is fluent, writes poetry in French, reads novels, and speaks with ease to native speakers.

Michael is an active student in Modern Languages.  He has studied abroad through the Ambassador Program getting to know Paris like the back of his hand and worked alongside professors as a Teaching Assistant to experience the other side of the classroom.  He has worked as an English tutor for foreign exchange students, been inducted into the French Honor Society, completed a Service-Learning Assistantship in Nice, teaching American culture in a middle school, serving as a French Club officer, and forming lifelong friendships with classmates he met in his French classes.

After graduation, Michael will serve in the Peace Corps for 2 and a half years, teaching English as a Foreign Language in Benin, West Africa. After his service ends, he plans on continuing his education by earning a master’s degree in French.  Michael says, “Being in the classroom has always been a passion and I’m eager for any and every opportunity in the future to pursue teaching!”

In Michael’s words: For me learning a language is not just about the language itself, but the culture around it. My time studying French has introduced me to so many amazing people and opportunities, all of which have helped me shape my world-view. It’s also helped me to strengthen my confidence. Speaking a foreign language can be intimidating, but once you get over the mental roadblock of being afraid to make mistakes, it becomes easier to overcome any mistakes and learn from them while pushing yourself outside of your comfort zone. That sort of confidence spread into all other areas of my life as well.

Michael’s advice to future ML students is: “immerse yourself as deep as possible into the language, the culture, and the program here at WSU. This program is absolutely phenomenal and has so many amazing and welcoming people and opportunities. Don’t be afraid to make mistakes and jump right in!”