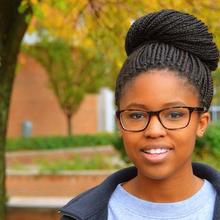 Jasmine Higgins is a senior dual-major in French and Mass Communications, who has been studying French language and culture since her freshman year of high school. Currently serving as the Vice-President of Wright State’s French Club, she organizes and participates in club events, including our first French karaoke night. Jasmine studied abroad through Wright State’s Ambassador Program led by Dr. Pascale Abadie and Dr. Kirsten Halling in the summer of 2013, where she took part in the first Ambassador Internship in Bordeaux, working in an at-risk high school. After returning from France, armed with confidence and enthusiasm, she increased her participation in the Modern Languages Department.

Jasmine is a proud member of the Theta Epsilon chapter of the National French Honor Society, Pi Delta Phi, inducted in 2014. Given her academic achievements, she has had the privilege of working closely with the Modern Languages Department as a Supplemental Instructor and an elementary language course assistant. She has also contributed to the success of the annual French Immersion Day for high school students.

Jasmine will graduate in summer 2015, after returning to France with the annual Ambassador Program, during which she plans to experience French media firsthand through an internship in Paris.

Jasmine is honored to receive this award, and wishes to thank the French section for their guidance. She is grateful for their passion and encouragement, which have inspired her to try new opportunities. She credits her success as an undergraduate student largely to her close involvement with her French professors and peers. She would also like to thank her family for their constant love and support.

Jasmine lives in Dayton and works at a local radio station. She plans to use her skills in French and Communications to begin a career in international broadcasting.