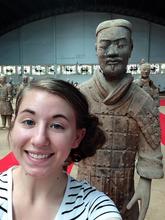 Allison Mills will graduate with an International Studies major, a Chinese minor, and a TESOL (Teaching English to Speakers of Other Languages) certification. She first experienced her zeal for learning languages through studying Spanish in high school. Coming to Wright State, she knew that studying language would be an integral part of her future. As it turns out, learning one of the world’s most ancient languages became her new passion!

Allison is vice-president of the Chinese club; she loved to help prepare for and participate in the annual Chinese Immersion Day. She also studied in China on the 2015 Ambassador Program to China with both of her professors, Haili Du and Dr. Maan Broadstock. They visited 5 major cities including Beijing, Chengdu, Xi’an, Shanghai, and Suzhou. From beholding incredible historical sites, eating delicious cuisine, practicing her beloved new language, and forming new friendships, she is eager to return!

After graduation, Allison plans to teach English in either Taiwan or China before attending graduate school. She would eventually like to pursue her master’s degree in either foreign language education or TESOL. Allison wants to become an educator because she believes that good teachers are a catalyst for change. “They are able to see who a student can become and invest themselves to change students’ lives for the better. If it wasn’t for the incredible teachers I’ve had, I honestly don’t know where I’d be. They’ve made all the difference in my life. If I can be even half as accomplished as the teachers I’ve had, then I will be a successful educator!”

Allison would like to thank her wonderful Chinese professors for all of their much-appreciated hard work, guidance, and encouragement. As well, she gives a heartfelt thanks to the entire Modern Languages staff as it has been an honor to both work with and learn from them. Lastly, she’d like to thank her family and friends for always loving and supporting her. “Truly, God has blessed me with some tremendous people! I am thankful for them everyday!”