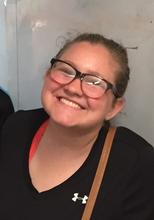 Abby will be graduating this spring with a Major in French and a Political Science minor. In the fall, she will be attending graduate school to earn her Masters of Library Science to become a youth services librarian, a position that will allow her to combine her love for languages and reading in free educational programs for children and teens.

Despite consistently working two jobs to pay for college, Abby has maintained an exceptional academic record, along with a long list of impressive service achievements. Her service as French club president was key to the club’s successful events: cooking and tasting days, presentations, field trips, April Kraze, Fall Fest, and many more interactive target language games and activities. Her service in French also includes a service-learning assistantship in Bordeaux, France where she taught American culture in an at-risk French high school, two years of volunteering for the annual French Immersion Day for high school students, and two semesters of teaching French lessons to area middle schoolers.

We will all miss Abby’s clever wit, her joyful enthusiasm for French, her storytelling skills, and her ability to unite students in study groups and French club events. Abby is a team-player, who puts others before her, compliments and celebrates her classmates’ successes, and gives generously of herself to others. When asked what she has learned from studying a foreign language, Abby reveals her natural humility in her response: “The greatest lesson I’ve learned studying French is that I will never be perfect, and that’s okay. If I work hard and I give my all to what I do, I’ll move closer towards that goal.”

Abby’s favorite quote is, unsurprisingly, by her favorite poet, Jacques Prévert: “Le bonheur en partant m’a dit qu’il reviendrait” or, in English, “Happiness, on leaving, said he would come back.” We look forward to Abby coming back to Wright State to tell us some of her famously engaging stories and share her graduate school and career experiences with us.

Abby in her own words:

1. Why did you choose to study French?

In high school, I had a few rough patches, and one of the only constants in my life was my French class. Learning about France and about the French culture reignited a spark within me and I fell completely in love with it. I chose to study French because I wanted to learn as much about this beautiful culture as I could.

2. What were the highlights of the French program for you?

One of the biggest and most obvious highlights was participating in the study abroad program. I was able to live with a family in Bordeaux, France for a week and spent two weeks studying in the most beautiful city in the world, Paris. Beyond that, my favorite classes were Poetry and Music with Dr. Halling and Comic Books with Dr. Abadie. These experiences gave me a better understanding of the French culture and French language beyond what I could have ever learned from a book.

3. What have you learned about yourself in studying French?

The greatest lesson I’ve learned studying French is that I will never be perfect, and that’s okay. If I work hard and I give my all to what I do, I’ll move closer towards that goal.

4. What is your life philosophy?

There is always room to grow as a person and to learn. Mistakes are a learning opportunity, not a failure.

5. What are your career and personal ambitions? Where do you see yourself in ten/twenty years?

Ten years from now, I’d like to be living in the Washington, DC area and working in the Library of Congress as a youth services librarian. My goal is to teach children and teens about France and the French/Francophone culture through storytimes and other library programs. Maybe in twenty years, I’ll try to switch things up and do English storytimes in France!

6. What is your favorite quote?

“Le bonheur en partant m’a dit qu’il reviendrait” or, in English, “Happiness, on leaving, said he would come back” by the poet Jacques Prévert.