The Women, Gender, and Sexuality Studies Program places women and other marginalized peoples in all their diversity at the center of scholarly inquiry and examines how gender and sexuality influence our personal identities, cultural and artistic expressions, social arrangements, political and economic systems, and our ways of knowing and understanding the world. Women, Gender, and Sexuality Studies is an interdisciplinary program incorporating history, literature, communication, sociology, political sciences, economics, fine arts, philosophy, religion, cultural studies, and the health sciences to help prepare students for a broad array of graduate and professional programs, as well as an extensive range of careers in public, private, and nonprofit organizations at the local, national, and international levels.

The partnership between the Women’s Center and women, gender, and sexuality studies program (formerly women’s studies) is built on our shared commitments to teaching, learning, and scholarship, as well as feminism, activism, and work for social justice. Together, we provide opportunities for all members of the community and graduate thoughtful, engaged citizens. On many campuses, centers and programs do this work with varying degrees of collaboration. We are proud to lead units that do this work together, creatively, and with, we believe, greater effect.

Through our programming model, each year we partner to bring scholars, artists, and activists to campus so all members of the campus community can benefit. These events are also linked with women, gender, and sexuality studies and other academic courses and greatly enrich the university curriculum. The students who attend our co-curricular programming events report broadened perspectives and enhanced experiential learning.

In addition, our units work to transform not just individuals through our programming but also to transform the campus. Women, gender, and sexuality studies does this through the curriculum and through the scholarship of its faculty; the Women’s Center does this by working to improve campus climate through policy and advocacy. Our units also work closely with Latinx, Asian, and Native American Affairs, the Bolinga Black Cultural Resources Center, and the African and African American Studies Program, among many other partners in academic and student affairs. 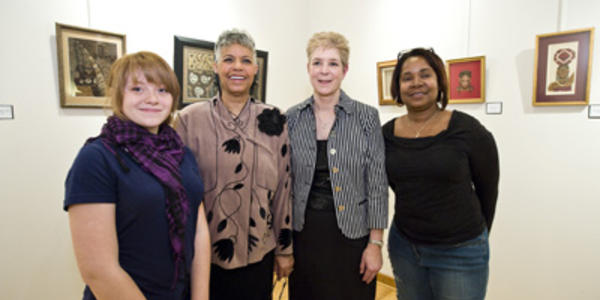 Join us in celebrating 20 years of partnership between the Women's Center and the Women's Studies program Friday, March 8 from 2–4 p.m. in the Millett Hall Atrium.

At the time, the creation of a women’s studies B.A. degree program made Wright State one of only two state universities in southwest Ohio (the other being Miami) and the only higher education institution in the area to offer a free-standing major in somen’s studies. Despite its relative infancy, within the first seven years since its creation, the women’s studies program at Wright State constituted the largest program in the local area with the most courses, affiliated faculty, and undergraduate and graduate degree and non-degree offerings. In 1999, and in recognition of this swift and significant growth and development, the program received the Wright State President’s Award for Excellence as the most outstanding unit on campus.

In 2015, after experiencing further growth and along with significant revisions to its academic programs of study, the women’s studies program changed its name to Women, Gender, and Sexuality Studies. This new development was on trend with other national WMS to WGSS program name changes and reflected more accurately the teaching and research areas of its faculty, the breadth, and diversity of courses the program was able to offer students, and a more inclusive curriculum. Today, the women, gender, and sexuality Studies program offers an interdisciplinary program that places women and other marginalized peoples in all their diversity at the center of inquiry and examines how gender and sexuality influence our personal identities, cultural and artistic expressions, social arrangements, political and economic systems, and our ways of knowing and understanding the world.