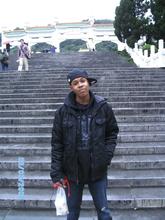 Najee Woods is a Political Science major and Chinese Studies minor. When he was 15 years old, he became interested in learning Chinese because he wanted to understand Taiwanese culture, politics, and society.  After graduating, he aspires to attend National Chengchi University in Taiwan for graduate school to improve his Mandarin skills. From reading Sun-Tzu’s Art of War to Tang Dynasty poems, Najee believes Chinese is one of the most interesting languages in the world.

When Najee enrolled at Wright State in 2010, he was eager to learn Chinese and took his first class under instructor Marsha Markert who was impressed by his ability to use traditional Chinese characters. According to him, Mrs. Markert gave him stepping stones and the golden opportunity to learn the Chinese language.  “She was one of the best teachers I ever had at Wright State who pushed me to reach my capabilities, guided, and believed in me. Without Mrs. Markert as my teacher, I wouldn’t be here learning Chinese.  She is simply amazing.”

Najee attributes his motivation to continue Chinese to his girlfriend Jin Yu-Ching, his “mother” Haili Du, and Maan Broadstock who are by his side to support him. When in doubt, they steer him back into the right direction. With their guidance, support, and love, Najee continued studying Chinese for the next four years.  He also feels grateful for his classmates Katherine Grof and Chen Yun Fang for their friendship and helping him improve.

Being honored by Modern Languages is one of the biggest honors he has ever received. Najee feels humbled because his hard work, dedication, and passion for Chinese has caught the department’s attention. When Maan and Haili nominated him as the 2015 Outstanding Senior in Chinese, Najee wanted to cry because of this acknowledgment of his Chinese language achievement.