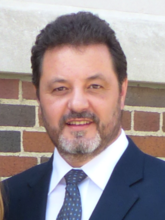 “Thanks to my studies at Wright State, I learned a lot about my own culture. I have been able to appreciate the history of Spain and Latin America from a more objective perspective than the one I had been taught in Spain, my home country. Sometimes things look clearer from afar. For example, I became interested in Afro-Hispanic history, one that still remains undiscovered in much of Spain and Latin America. I also learned a lot about Latin American culture from WSU organizations such as Amigos Latinos. Through my interactions with them, I continue to learn about the current situation of Hispanics and Latinos in the United States.”

Francisco Marqués-Vuelta obtained a degree in Private Investigation from the Criminology Institute, College of Law, University of Barcelona and developed his career as a private detective in his native Spain. There, he held leadership positions in several world detective organizations.

Upon moving to the United States, Francisco enrolled in Wright State’s Spanish program and quickly earned a reputation not only for his stellar academics but also for his many thoughtful contributions to the Spanish program and the Department of Modern Languages.  For example, he generously shared his knowledge of technology by teaching a workshop on Prezi to other Spanish students in the class and by working as a Spanish Supplemental Instruction Leader.  An accomplished guitar player, he has generously shared his musical talents and a collection of indigenous Hispanic instruments. He served as a volunteer photographer of the Modern Languages events and presented at Spanish immersion days for several years.  As President of the Spanish Club, Francisco contributed dozens of Spanish movies, a pop-corn machine, and many other authentic Spanish artifacts. He also participates in several events related to Spanish and the Hispanic community in Dayton, such as PACO (Puerto Rican, American and Caribbean Organization).

Francisco’s many contributions have earned him a place on the Dean’s List, and honorary memberships in the Spanish National Honor Society Sigma Delta Pi, the Golden Key National Society of Leadership, and Phi Kappa Phi.

Francisco possesses a sharp and witty pen and has published numerous opinion pieces and columns in Spanish regional newspapers. Here in Dayton, Francisco publishes in the local Latino newspaper La Vanguardia, which circulates 10,000 copies in the Dayton-Cincinnati-Columbus region.

Upon graduating from the Spanish program in the Fall of 2017, Francisco enrolled in the WSU Master of Humanities Program to complete a thesis on African influences on Latin American culture and Hispanic music. He would like to expand the more traditional focus on the African-influenced Caribbean music by examining the previously overlooked African influences on lesser-known geographical areas. These include northern Argentina, which has traditionally utilized the bombo legüero, a large drum made of a hollowed-out tree trunk, and Peru, the birthplace of the cajón music, a genre that incorporates an empty wooden fruit box. This research will greatly expand our understanding of African cultural influences on the South American continent and beyond.

Francisco completed a study abroad program in Puerto Rico and he loves to travel all over the States to learn about other “foreign” (to him) cultures. Up to now, he has visited 17 states in the mainland USA.