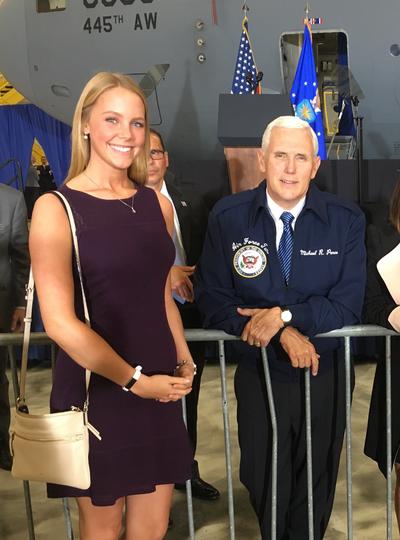 Christina Hale, a Crime and Justice Studies major, paid particular attention to one of the Program Director’s group emails sent in 2016. The email listed an opening for a (paid!) position as an Investigative Support Assistant Student Trainee with the United States Secret Service Dayton office through the Student Pathways program. Christina took the chance in applying and was selected for the position. Fast-forward through nine months of extensive background investigations and interviews, she is happy to now be a fulltime employee with the United States Secret Service. Within her position as an Investigative Support Assistant, she works closely with agents and the U.S. Attorney’s Office building investigations in the Dayton area, has had experience gathering evidence in the field following the execution of Federal Search Warrants, assists agents in suspect interviews, has traveled to the Sacramento California Resident Office to aid with counterfeit backlog, and is currently working with a team of agents to add new legislation to the Ohio Revised Code to address Counterfeit. Within the first few weeks of working with the USSS, she had the honor of meeting Vice President Mike Pence and seeing President Donald Trump speak at nearby events.

She accredits her exceptional mentors/role models for helping her succeed and is thankful for the opportunity to work alongside such distinguished leaders within the Secret Service.

Christina will be graduating from Wright State University in December 2017 with a 3.8 GPA in Crime and Justice Studies and plans to further her education with a Master of Public Administration program while continuing her work with the U.S Secret Service.

“I use knowledge gained from the Crime and Justice Studies program every day in this position, and I can honestly say the professors have prepared me well for a career in this field.”