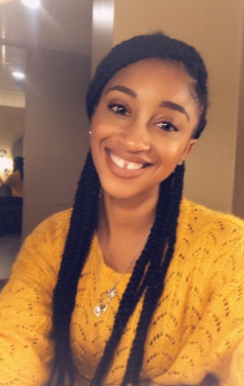 Angela Dorsett graduated from Wilmington College in 2017 with a B.A. in Criminal Justice. After graduating, she knew she wanted to understand the Criminal Justice just a little more. She decided to attend Wright State University to obtain her master’s degree. While at WSU, Angela chose to step out of her comfort zone, and research probation officers’ view on treatment services offered to probationers with mental illness across three Ohio counties. Having never worked with this population gave Angela a challenge, and the drive to complete this project. Her study shows, that there are numerous treatment services available for probationers with a mental illness while also assessing those services. Angela hopes that her study will pose as a foundation
study for future research, as there is little about her topic.

While at WSU, Angela served as a Teaching Assistant for two years, peer mentor, and has helped with different events put on by the program. She got the opportunity to travel to Yale University
and attend the Urban Ethnography Conference held annually. While there, Angela was able to network with other professional students, share her research, and listen to ethnographers from around the world present their research findings. Angela also participated in a practicum with the Ohio Justice and Policy Center (OJPC) in Cincinnati Ohio. During this time, Angela got to work along the Director of the OJPC to help ensure, their clients were receiving adequate care while in prison. This gave Angela the drive she needed to decide to go to law school.

Angela’s future plans are to start working for the next two years while studying for the LSAT. She hopes to attend law school at either the University of Cincinnati or the University of
Pittsburgh. Angela is thankful, and appreciates everyone in the ABS Program, and the department, for their support throughout these two years.