The professional development day will include six hours of workshops and clinics given by the honor band conductors and Wright State faculty. It will also include an open clinic/rehearsal with the WSU Wind Symphony under the direction of Shelley Jagow, and a luncheon with the Wright State winds and percussion faculty.

The weekend also includes an opportunity for participating high school seniors to audition for acceptance into the Wright State School of Music. In addition, a music scholarship will be awarded to one auditioning senior at the Saturday concert. Shelley Jagow, Ph.D., is professor of music at Wright State University and director of both the Wind Symphony and the Symphonic Band. She is a Vandoren Regional Artist, as well as a music education clinician for Conn-Selmer, Meredith Music, and GIA Publications. 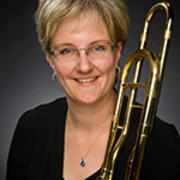 Applied Trombone
Gretchen McNamara, Ph.D., is the trombone instructor at Wright State University in Dayton, Ohio, a position she has held since 2007. In addition to her responsibilities with the trombone studio, she also teaches instrumental music education and supervises field placements.

Richard L. Saucedo retired in 2013 as Director of Bands and Performing Arts Department Chairman at the William H. Duke Center for the Performing Arts at Carmel High School in Carmel, Indiana. During his 31-year tenure, Carmel bands received numerous state, regional and national honors having performed at the Music for All National Concert Band Festival and the Midwest Band and Orchestra Clinic. Saucedo was named "Bandmaster of the Year" for 1998-99 and "Outstanding Music Educator" in the state of Indiana for 2010. He was inducted into the Music for All "Hall of Fame" in 2015. Mr. Saucedo is a freelance arranger and composer, having released numerous marching band arrangements, choral arrangements, concert band works and orchestral compositions. He is currently on the writing staff at Hal Leonard Publishing.

Kyle Young is Associate Director of Bands at Carmel High School in Carmel, Indiana. His responsibilities include co-conducting seven concert bands, one of six jazz ensembles, athletic bands, and marching band. Prior to arriving in Carmel, Kyle served as a band director in the Mason City School District in Mason, Ohio. Kyle received his bachelor's degree in Music Education from Wright State University and his master's degree from VanderCook College of Music. Kyle was named the 2013 Alumni of the Year for the Wright State University School of Music.

Fran Kick is an author, educational consultant, and professional speaker who knows What Makes Kids KICK! He is the creator and presenter of KICK IT IN®, a series of self-motivational personal leadership presentations and materials. Since 1998, Fran has served as the leadership coordinator with the Music for All Summer Symposium. Fran speaks at many state, regional, and national conferences. He has his B.A. in Music Education from Wright State University and a M.A. in Educational Psychology from Antioch University.

Please pay the registration fee only if you have been notified that you are accepted for the Honor Band.

All participants must complete the waiver form (DOC). Download and complete this form and bring it with you to the festival.

The below links will be made available in February.

If you need a parking pass, please email Bill Jobert at william.jobert@wright.edu

Any hotel reservations are to be made by the director or student’s guardians. You may request university discount rates at the Holiday Inn Dayton/Fairborn or Tru Hotel by Hilton. Access rates here: