The School of Fine and Performing Arts offers a wide range of performing ensembles. These ensembles are open to all students at the university, regardless of major, and, in some cases, to community members. Auditions are required for all music majors/minors throughout their course of study. Placements will be determined by the ensemble director in collaboration with your applied studio instructor.

Over the past decade, the Wright State Wind Symphony has become recognized across Ohio and the Midwest as one the region’s most outstanding collegiate band organizations. In 2000, the Wind Symphony conducted its first-ever international performance tour to Matsusaka, Japan, and Seoul, Korea, and returned for a second tour to Japan in June 2004.

In addition to annual tours, the ensemble performs for various conferences and events, including state conferences of the Ohio Music Education Association (OMEA).

The ensemble, and its satellite organization, the Wright State Chamber Players, perform at professional conferences and conventions across the country and abroad.

Performs band music of all styles. Open to all students without an audition.

The Wright State University Symphonic Band is a performing wind band open to all Wright State students from a wide variety of fields of study within the university. The band rehearses on Tuesdays and Thursdays from 2-3:20 p.m. in Room 190 in the Creative Arts Center. The band performs at least one concert each semester with musical repertory ranging from pop concerts to wind band classics and contemporary compositions. In addition, a one-day off-campus tour performance is often organized at a high school within the greater Dayton area.

Performs jazz, rock, and contemporary music at all home basketball games and for other campus activities. Audition required (contact the director for details). 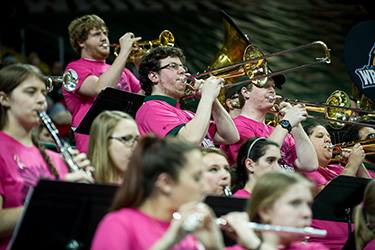 The Wright State University Raider Pep Band provides musical entertainment and spirit at home men’s and women’s basketball games, as well as other select events around campus and the community. The ensemble, comprised of Wright State students, performs traditional rock, high energy contemporary music, and cheers to help excite the crowd and drive the Raiders to another Horizon League championship and NCAA tournament berth. Members of the band receive free admission to all games performed, plus the opportunity to receive scholarship money. The band travels to the Horizon League tournament and select members of the band have traveled with the men’s basketball team to NCAA tournament games.

The band splits into green and gold bands of equal instrumentation to cover all the events and is made up of flutes, clarinets, saxes, mellophones (F horn), trumpets, trombones, tubas, electric bass, and drum set. Membership is open to all Wright State students, and is limited only by instrumentation, so sign up early to ensure a seat!

The university's premiere jazz ensemble, this group performs repertoire of the 20th and 21st century, primarily using the traditional 17 to 18-piece Big Band format and instrumentation. Students learn crucial elements of ensemble execution, professionalism, jazz history, style, and improvisation. While membership is open to any Wright State student regardless of major, auditions are required (to access the Jazz audition excerpts, click on the appropriate link below).

The Wright State University Jazz Ensemble is a 17 to 18-piece 'Big Band' ensemble, open to all Wright State students by audition. This group performs music ranging throughout the 20th and 21st centuries, with a special emphasis placed on both historically significant and  more contemporary composers; Count Basie, Duke Ellington, Maria Schneider, and Jon Fedchock, to name a few. The Wright State Jazz Ensemble performs in a wide variety of styles including bebop, pop, rock, historical swing, Latin, and avant-garde.

The band performs multiple times each semester, both on-campus and within the greater Dayton community. While improvisation is strongly encouraged for interested members, students have the opportunity to develop their improvisatory skillset, and the band is always looking for solid 'section players' to contribute to the ensemble. Auditions are held each fall, and subsequently when slots open up mid-year. The traditional Big Band instrumentation is five saxes, four trumpets, four trombones (one bass), and rhythm section (piano, bass, guitar, and drum set). Occasionally, the ensemble is augmented with the addition of woodwind doubles (flute, clarinet, bass clarinet), vibraphone, auxiliary percussion, and vocalists.

Students interested in joining the Wright State University Jazz Ensemble should look at the audition materials (below), and contact Stephen M. Wadsack at stephen.wadsack@wright.edu.