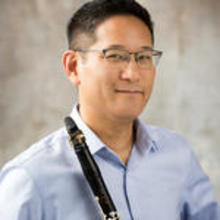 John Kurokawa is the Instructor of Clarinet at Wright State University. In addition to teaching applied clarinet, he teaches courses in woodwind chamber music, woodwind pedagogy, and music education. He performs in the resident faculty wind quintet, the Wright Winds, and the WSU Chamber Orchestra. His performances have been praised for their “...warmth, communication, and easy virtuosity” (Cincinnati Enquirer) and “truly flawless technique and intonation...a tone as smooth as silk and velvet.” (Kettering-Oakwood Times). He has presented clinics and performed at institutions across the midwest, including the University of Cincinnati College-Conservatory of Music, Penn State University, James Madison University, Viginia Commonwealth University, Bowling Green State University, the University of Evansville, the University of Arkansas-Fort Smith and many others, as well as being a frequent clinician with high schools and youth orchestras in the Cincinnati and Dayton areas.

Kurokawa currently performs as Principal Clarinetist of the Dayton Philharmonic Orchestra and Cincinnati Chamber Orchestra. He has been a featured soloist with both ensembles, performing the works of Mozart, John Williams, Gerald Finzi, and John Adams. Aditional solo appearances include the WSU Chamber Orchestra and most recently, the Dayton Bach Society and the WSU Wind Symphony performing Michael Daugherty's Brooklyn Bridge for solo clarinet and wind ensemble. In the summer Kurokawa performs as Principal Clarinetist of the Cincinnati Chamber Orchestra's festival, 'Summermusik' and has also performed as Eb clarinetist and guest Principal Clarinetist with the Cincinnati Symphony Orchestra. An avid chamber musician, he gives educational concerts at schools all over the Miami Valley with the Dayton Phiharmonic Woodwind Quintet and is a founding member of the Prestige Clarinet Quartet, which has been a featured ensemble at the Oklahoma Clarinet Symposium, International Clarinet Association Clarinetfest, Ohio Music Education Association, and Midwest Band and Orchestra Clinic. Kurokawa has performed on the International Double Reed Society Conference, published articles in the Triad, presented at the Ohio Music Education Association Conference, and in 2013, was one of twenty faculty members recognized by Wright State University for Excellence in Teaching General Education.

Kurokawa holds the B.M. in woodwind performance (specializing in clarinet, flute, and saxophone) from Bowling Green State University and the M.M. in clarinet performance from the University of Cincinnati College-Conservatory of Music. His teachers include Angelo Fortini, Edward Marks, and Ronald de Kant.

Mr. Kurokawa performs exclusively on the Yamaha CSVR Clarinet and is a Yamaha Performing Artist.