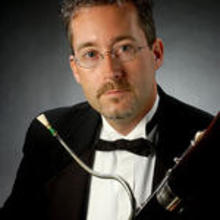 Bill Jobert is now in his 10th year at Wright State where he serves as Lecturer of Bassoon and Coordinator of Music Education.

Jobert received his master’s degree in Bassoon Performance and Literature from the Eastman School of Music and his major teachers include Bill Davis, John Hunt, Loren Glickman and Carl Niche. Jobert performs in the Faculty Woodwind Quintet and with the University Chamber Orchestra as well as presenting a faculty solo recital each year. Over the past six years he has commissioned and premiered works by composers Michael Issacson, Steve Winteregg, Carlos Carrillos, Christopher Weait, and Robert Broemel on his faculty recitals and at the IDRS conference. He has also been involved in video recording projects aimed at bringing new music and composers to a wider audience.  Currently Jobert is working with several other bassoon professionals to record all of the OMEA bassoon trios so that young bassoonists and music teachers can have a resource for selecting and preparing these pieces.  Jobert served for several years as principal bassoonist and personnel manager in the Lebanon Symphony Orchestra and is on the sub list for the Dayton Philharmonic, Hamilton-Fairfield Symphony, and the Middletown Symphony Orchestra.

Jobert received his bachelor’s degree is in Music Education from the University of Georgia and student taught at Lassiter High School under Alfred Watkins. He taught for over 12 years in public school, directing bands at the middle and high school levels and building award winning instrumental programs in upstate New York and Raleigh, North Carolina. Jobert has worked on the marching band staff at Mason high school and Lebanon high school and has served as a woodwind adjudicator for OMEA and the woodwind editor for the Triad Magazine.   He has also served as a band and orchestra adjudicator for Showcase Music Festivals and at the Alberta Band Association Concert Band Festival in Canada.  At Wright State Jobert serves as the Coordinator of Music Education, teaches education pedagogy courses, and in 2008 was awarded Wright State's Outstanding Instructor Award.

Recently  Jobert served as the National Scoring Supervisor for edTPA Performing Arts and worked with the SCALE team at Stanford University to develop the rubrics and scorer training modules. He does state and national presentations and has published several articles on edTPA.

Currently Jobert maintains a large high school and middle school bassoon studio with students from Mason, Sycamore, Lakota East, and Kings and is one of the double reed instructors at the Double or Nothing Double Reed Camp.

Outside of all of that Jobert manages to make time for his family and to read a book or two. He is a huge Stephen King fan, having read almost everything published by the master of the macabre Careful to never go as far as to say that he is King's number one fan, as that would just be farmhouse-in-the-middle-of-the-woods creepy, Jobert would be amazed to meet King someday. Other authors he enjoys include Joe Hill, Tobias Wolf, and DJ Molles, and Neil Gaiman.