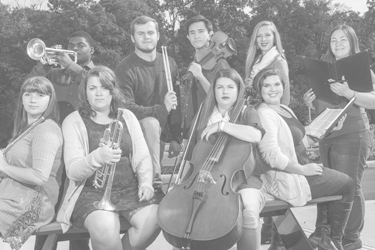 Colla Voce is a chamber group that incorporates music written for trombone, piano and voice. The group was created in 2017 and appeared in many concerts through Kentucky and Brazil, presenting arrangements of traditional and Brazilian music, as well as original compositions. The members of the group are the Brazilian soprano Amanda Aparicio, the Brazilian trombonist and composer Hugo Pinheiro and the American trombone soloist Bradley Kerns. In 2020 Colla Voce will make a tour through Ohio, and will present concerts exclusively of Brazilian music. The chamber group will also star the Chinese pianist Olivia He, and the American trombonists David Seder and Mike DeSousa as guests musicians.

Amanda Aparicio is from Manaus, Amazonas, Brazil.  She was the winner of the “Canto da Floresta” singing competition in 2017, semifinalist of the “Maria Callas”  singing competition in the state of São Paulo in 2015, and winner of the first round of the “Prelude 2018” —Brazilian Television National Competition for young soloists, instrumentalists and singers, among the 24 best young soloists of the year 2018. She was a soprano solo for 4 years of the Amazon Guitar Orchestra, traveling to several states of Brazil, and she is currently a soprano of the Amazon State Choir, where she sings symphonic concerts and several operas at the Amazonas Opera Festival.  She also was a soloist at Mendelssohn's incidental music  “A Midsummer Night's Dream” and sung the title role of Galatea in Händel’s opera “Acis and Galatea” within the Amazon Opera Festival in 2018.

Solo Trombone at Amazonas Philharmonic Orchestra in Manaus (Brazil) since 2003, and low brass teacher at Amazonas Experimental Orchestra. He holds a Trombone Bachelor at São Paulo State University(USP) Brazil and a Conducting Bachelor at Amazonas State University in Brazil. He has completed his Master Degree in the Hochschule für Musik und Theater in Zurich - Switzerland, and is pursuing a Doctoral of Musical Arts degree at University of Kentucky - USA, where he also is a Teacher Assistant.

As a composer, Hugo Pinheiro has written pieces for trombone in several formations, and also songs for voice and piano. His works have been performed and recorded by renowned nacional and international artists.

Xin Zhang, from China, enjoys an active concert career in North America, Europe and Asia. She began studying piano at age 4 and made her first solo recital at age 6，and was highlighted as one of the “Most Influential Performers” in France 2008.She holds BM and MM degrees from the Central Conservatory of Music in China and received second MM degree from the San Francisco Conservatory of Music, also pursuing a PSD at McGill University in Canada at 2016. Currently she is a DMA candidate and teaching assistant at University of Kentucky , and her teachers are Dr. Irina Voro. During the last year, she won 11 awards in 2017,including the first prize at Roma Virtuoso piano competition, gold award of Vienna piano international competition and Outstanding Performance award of New York international piano competition，also invited to perform at the Carnegie Hall at Jan.2018. She will make a world premiere of new music,which name is "static" at Germany.