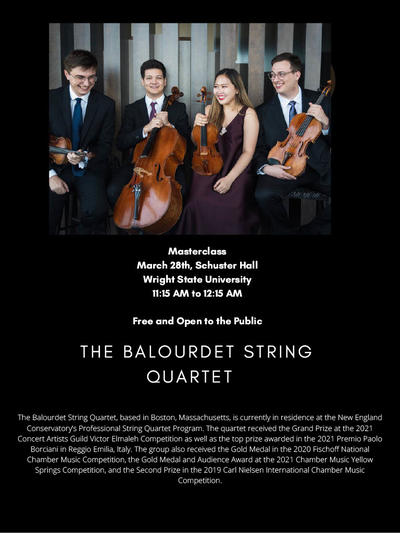 Free and Open to the Public

The Balourdet String Quartet, based in Boston, Massachusetts, is currently in residence at the New England Conservatory’s Professional String Quartet Program. The quartet received the Grand Prize at the 2021 Concert Artists Guild Victor Elmaleh Competition as well as the top prize awarded in the 2021 Premio Paolo Borciani in Reggio Emilia, Italy. The group also received the Gold Medal in the 2020 Fischoff National Chamber Music Competition, the Gold Medal and Audience Award at the 2021 Chamber Music Yellow Springs Competition, and the Second Prize in the 2019 Carl Nielsen International Chamber Music Competition.

Highlights of the 2021-2022 season include Accademia Musicale Chigiana, La Jolla Summerfest, an in-person return to the Schneider Concert Series, and a recital in NEC’s Jordan Hall.

The Balourdet has shared the stage with renowned artists including Cho-Liang Lin, as well as members of the Dover Quartet. It has studied and performed at festivals including the Amelia Island Chamber Music Festival, Aspen Music Festival, Robert Mann String Quartet Institute, and Accademia Musicale Chigiana. The Balourdet String Quartet works primarily with Paul Katz at the New England Conservatory, as well as members of the Cleveland and Borromeo Quartets. The quartet was formed in 2018 at Rice University in Houston, Texas under the tutelage of James Dunham, Norman Fischer, and Cho-Liang Lin.

The Balourdet String Quartet gets its name from Antoine Balourdet, chef extraordinaire at the Hotel St. Bernard and beloved member of the Taos School of Music community.

Chamber Music in Yellow Springs gratefully acknowledges funding for this concert and outreach event from the Allegro Fund of The Dayton Foundation, in addition to support from the Ohio Arts Council and the Yellow Springs Community Foundation.