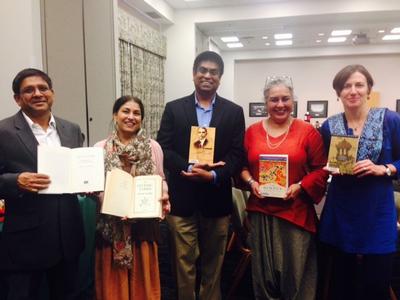 Dr. Arshia Sattar, a scholar of Hindu religion and culture from Bangalore, India, delivered an engaging lecture last Thursday, September 18th, to a group of Wright State students, faculty, staff, and community members, as part of a two-day visit to the WSU campus. Dr. Sattar, who has a PhD from the University of Chicago in South Asian Languages and Literatures and whose translations of Sanskrit literary and religious texts are world renowned, spoke to a group of roughly forty people about censorship in today’s India. Entitled “The Right to be Offended: Debating Censorship in India’s New Democracy,” her talk examined the legal history of censorship in the world’s largest democracy.

This public forum on censorship in South Asia was prompted by Penguin Press, India’s recent decision to pull from production, recall from all stores, and pulp all available copies of a prominent American scholar’s history of Hinduism, entitled The Hindus: An Alternative History. Penguin Press acted in response to a legal complaint filed against the book on the grounds that it offended Hindu sensibilities.

Dr. Sattar, who studied at the University of Chicago with the book’s author, Dr. Wendy Doniger, discussed this controversial censorship case. She also explained the political and social factors prompting censorship of specific texts as well as the potential impact that such censorship has on the shaping of public conversations about important issues like religion, caste, and identity.

Dr. Sattar’s talk was followed by an informal reception, complete with Indian snacks and a book exhibit featuring titles that have been recently censored in various South Asian countries. The event was funded by a grant from CELIA and subsidized by the Honors Program and the English Department. It was organized by several CoLA faculty members whose research focuses on South Asia, including Dr. Arvind Elangovan, Department of History, Dr. Pramod Kantha, Department of Political Science, Dr. Alpana Sharma, Department of English, and Dr. Valerie Stoker, Department of Religion.