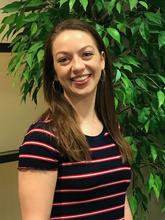 Megan Arseneau is a junior musical theatre major from Chicago. She transferred to Wright State from DePaul University in the Fall of 2016. Megan has been involved in numerous plays, musicals, and cabarets on campus. Her responsibilities range from performing in the shows to directing, choreographing, and organizing them. Professionally, Megan has performed at Weathervane Playhouse in Newark, Ohio, and Crossroads church in Mason, Ohio. This summer she will be in Collierville, Tennessee directing, choreographing, and teaching at New Day Children’s Theater.