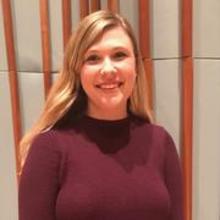 Jordan Kingsley has been recognized by the faculty for her dynamism and professionalism, her respect for others, and her openness. With a near-perfect GPA, she has made the most of every opportunity, and her work ethic and commitment to public service have been evident both in and outside of the classroom. Perhaps most notably, Jordan was appointed by Governor John Kasich as a student trustee on the Wright State Board of Trustees, which distinguishes her as one of the most influential student leaders on campus.

Jordan was also active in student government. As the Speaker of the House, she developed a freshman internship program.  As the Director of Diversity and Inclusion, she advocated for all under-represented and minority students at Wright State. Her commitment to public service is also evident through her contributions to our local community. Jordan has served as a mentor to high school and middle school students, and completed two internships as part of her Urban Affairs curriculum (one with St. Vincent De Paul Haven House and one with the City of Dayton). She so impressed her supervisors that she turned her internship into a career: she was hired by the Dayton City Manager to serve as a liaison between the City Manager’s Office and the City Commission. Congratulations, Jordan!