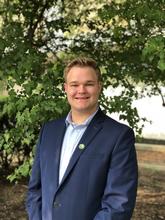 Jackson Cornwell is a third-year Political Science major with a double minor in Philosophy and International Business. After graduation Jackson hopes to get his masters in Journalism.  This is Jackson’s third year in the Student Government Association (SGA). He started as an Academic Affairs intern in his first year and then served as the College of Liberal Arts Senator his second year and he is now in his second term in that role.  Outside of SGA Jackson is heavily involved all around campus. Jackson is one of two head delegates of the WSU Model United Nations team, a Presidents Ambassador for 2019-2020, a member of the COLA Dean’s Student Advisory Board, the Vice President of SLC for the Sigma Phi Epsilon fraternity, and much more. Jackson loves musical theatre, Disney, and dogs. In his spare time, you can find him writing, listening to show tunes, shopping, or watching Will and Grace and the Golden Girls.