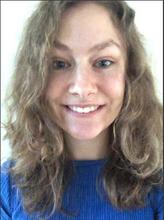 Born in Frankfurt, Germany, Antonia Stonerock went to high school in Grove City, Ohio, where she participated in track and the German American Partnership Program. Through that program, she hosted a German student in Grove City and then attended their school in Heidenheim, Germany, improving her language skills. Antonia graduates with a bachelor’s degree in German from the College of Liberal Arts. While a student, she received the Garrison Scholarship Award for German and was a student assistant in her professor’s German classes, gaining valuable experience in support of her long-term goal to move to Germany and teach there. Her hobbies and interests include spending time with family and friends, learning different languages, traveling, and exercising her language skills with others.