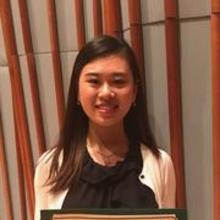 Vicky Hei Man Tong is a senior, majoring in Piano Performance and studying under Dr. Jackson Leung. At Wright State, she serves as pianist for the Symphonic Band and has represented Wright State in numerous recitals within Ohio and in Asia. In the past four years, Vicky participated in many competitions and won numerous prizes, including 1st place in the WSU Concerto Aria Night Competition, and 2nd place at the 8th Annual New Albany Symphony Concerto Competition, where she competed against students from six universities and conservatories. In 2017, she won 1st prize in the Young Artist Solo division of the OMTA Graves State Piano competition. She has also won prizes at the Three Arts Scholarship in Cincinnati and was the recipient for the OFMC Agnes Flower Scholarship. In the summer of 2016, Vicky attended the International Keyboard Institute & Festival in New York City. Congratulations, Vicky.