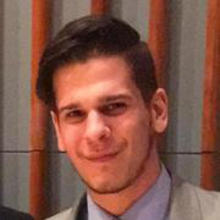 Stephen Monath is an active performer and educator. On campus, he has served as principal percussion of the Wind Symphony, performed with the Chamber Orchestra, worked as a member of the pep band, and won the WSU Young Artist Competition. As a member of the percussion ensemble, he performed over 75 times in support of campus receptions and events, including a solo performance for Tom Hanks. He has performed for various musical theater companies, worked with the Miami Valley Symphony Orchestra, performed as a soloist with the Troy Community Band, and was a featured performer with the Bob Becker Xylophone Soloist Seminar, where he worked alongside students from Japan, Toronto, and from throughout the U.S. He has also served as treasurer of the Dean’s Student Advisory Board, served on the Wind Symphony Leadership Council, and served as senior advisor of the Percussion Studio. Congratulations, Stephen.