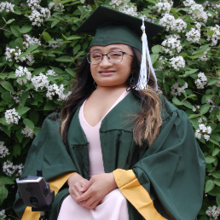 Rebekah Wyse is a senior at Wright State studying Social Work. She is originally from Taiwan but was adopted at twenty-one months old to live in the United States. Then two years later, her family became missionaries and she lived in China for nine years. Rebekah now lives in Ridgeville Corners, Ohio, where she attended Archbold High School and graduated in 2017. She is part of a diversity of extracurricular activities at Wright State, including holding leadership positions in the following organizations: Abilities current President, Asian Student Association (ASA) previous Vice President, Social Work previous Treasurer, and Advocates for Cultural-diversity and Excellence (ACE) previous warden and Treasurer. Her hobbies are attending the H20 Church on campus, watching superhero shows and movies, hanging out with her friends, residents, and family, and lastly enjoys cooking. Rebekah also has a great interest in serving others around the community and volunteering for Project Linus and the Giving Tree. After graduation in Spring 2022, she plans to work at a Children’s Hospital somewhere in Dayton.