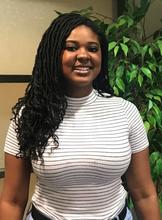 Dayton-born Holly-Kristina Averette lived in South Korea for three years and graduated high school on an American military base in Daegu, South Korea. She also lived in Texas for about a year and Massachusetts two years before returning to Dayton. Attending Wright State was a natural choice, since her family members completed their education here, and she wanted to continue that legacy. Holly chose Mass Communication because as a child she always wanted to be a broadcaster, or be on the news. She loves conducting interviews to get to know people’s stories through conversations, so journalism seemed a natural avenue to pursue. After graduation, Holly plans to pursue a Master of Education degree in Higher Education Administration. A non-traditional student herself, she believes non-traditional students are an underserved group within university settings, and she would like to use her training to help students reach their full potential.