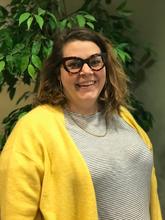 Dylan Marie Colvin is deeply devoted to Dayton, Ohio, the city of her birth. A year serving in Americorps in East Dayton, just blocks away from where she grew up in Walnut Hills, strengthened her commitment to social justice. After Americorps she began a Master of Humanities degree at Wright State, completing a thesis that responded to the social media conversation around the opioid epidemic in Dayton. It was the work of the rhetorician, Gloria Anzaldúa that drew her to complete her Master of Arts in English: Rhetoric, and Writing with an emphasis on posthuman pedagogy, which emphases the connectedness of students, teachers, technology, place, and nonhuman agents. Dylan is excited to have the opportunity to take that work to New Mexico State University to pursue a Ph.D. in Rhetoric and Professional Communication.