Each year the director of the liberal studies program, in consultation with faculty who teach in the program, select one graduating senior as that year’s outstanding student. The recipients of this award have achieved during their time at Wright State a superior academic record, demonstrating both intellectual creativity and effective communication skills. Eager to learn and willing to work hard, these students represent the liberal arts at their best. 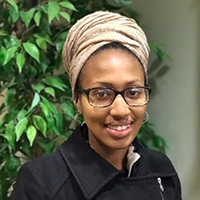 Yahziyl Palmer transferred to Wright State after earning an associate degree at Sinclair Community College. Over the past several years she has pursued her passions, which led her to achieve excellence in diverse fields. Yahziyl’s first passion is for learning, both inside and outside of the classroom. While her intellectual curiosity and interdisciplinary interests led her to major in liberal studies, she complemented this degree with programs that prepared her for her chosen vocation. Yahziyl’s true passion is to promote community development and cultural awareness in the local African American community and the Dayton region more broadly. She is graduating with a minor in African and African American studies, which reflects her interest in the history and culture of black people as expressed in diverse mediums, including dance, art, and other cultural forms. She is also graduating with a nonprofit leadership alliance certificate, which qualifies her as a Certified Nonprofit Professional. She was elected treasurer of the NLA Student Association, and in this capacity helped organize the association’s yearly recognition ceremony which celebrates the accomplishments of community leaders and organizations in the Dayton region. To enhance her skills, Yahziyl interned at several area nonprofits, including Harambee Coffee Roasters and the Dayton Food Bank. And, to study community development and cultural formation in the international context, she traveled to South Africa through USAC, where she participated in Wright LEAD, a cross-cultural community based leadership program for youth. During this program, she worked with local residents to promote community engagement, leadership, and self awareness. After graduation, Yahziyl plans to continue to follow her passions, perhaps working for a regional nonprofit or starting a service agency of her own.