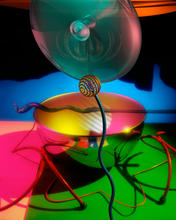 Photographic artworks added to the Wright State University permanent collection from the dozen shows curated by Professor Emeritus Ron Geibert from 1986 to 2007.

During his 27-year career at Wright State University, Professor Emeritus Ron Geibert curated over a dozen exhibitions that resulted in publications and/or additions for the school’s permanent collection. Among the listings was PARENTS, which bore witness to the profundity of that first and possibly foremost relationship in our lives: that which we share with our parents; and Water Being Water, featuring David Goldes, a scientist turned artist using the simplest of elements—H2O. Also of particular merit was the use of the latest in technology at that time—the CD-ROM—to inform audiences about the arts. In 1994, Geibert’s The New Street Photography was among the earliest CD-ROM publications about photography. As a freelance producer, Geibert and digital EDITIONS Dayton published a 1997 CD-ROM on the FSA period, followed by one that examined competition among youth in the United States and Japan.

Perhaps the most significant undertakings, though, were the Kodak-sponsored Photography in the 1990s: Fifty Portfolios and Photography Now: One Hundred Portfolios electronic publications. Each was the result of works submitted from around the world—the first culled from submissions by 500 artists from 30 countries and the second from nearly 1,300 photographers representing 60 countries. Each made use of jury panels composed of distinguished curators from Germany, Japan, France, and New York, Houston, Chicago, and Washington, D.C.