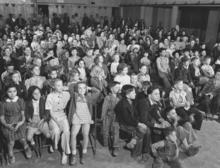 A reshowing of a 1986 exhibition, and the 1997 CD-ROM with rare video and audio components, illustrating the role of social and recreational events during the Great Depression.

In 1935, the Roosevelt Administration took steps to illustrate to Congress and the American people the success of their fight against rural poverty. One of the most influential efforts of documentation was a photographic program under the Farm Security Administration, now commonly called the FSA Project. According to Director Roy Stryker, “what we ended up with was as well-rounded a picture of American life during that period as anyone could get.” Stryker had asked that the photographers keep in mind “that the purpose is to show that the residents are leading normal, settled lives. The families eat, sleep, work, laugh, raise children, gossip, picnic, read books, and wash clothes.”

Archives preserve the past, inform the present, and affect the future. The Celebrative Spirit: 1937–1943 illustrates a country depending upon social and recreational events to boost the spirit of their communities. Collections allow for the learning from, the interpretation of, and the adaption to life over multiple generations and situations. For most, the FSA project is ancient history, but, for others, it is a source for reflection while encountering similar events or challenges in their own lives. Collections can, unfortunately, also be abused with the rewriting of history using different rules and criteria.

We will use the expertise of noted FSA historian F. Jack Hurley to provide a balance between the known and the speculated since he, among historians, had the most contact with the FSA photographers 45 years ago and during the decades that followed.