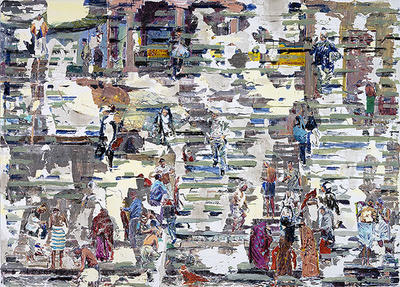 The Robert and Elaine Stein Galleries and Wright State University are excited to present “Aerial Roots”—an exhibition of paintings and drawings by Marius Lehene.

The exhibition is open from August 23rd to September 30th 2021. A closing reception and artist talk are scheduled for Wednesday, September 29th, at 6:00pm at the galleries.

Marius Lehene is a Romanian-born visual artist living in the United States. His recent exhibitions include shows at the National Museum of Art – Zalau, Romania, CICA Museum, Korea, Gallery MC, New York, Boulder Museum of Contemporary Art in Boulder, Colorado, Casa Matei Gallery in Cluj-Napoca, Romania, Chapman Gallery at Kansas State University, Whitney Center for the Arts in Wyoming, Manifest – Creative Research Gallery and Drawing Center in Cincinnati, Ohio, Pollock Gallery in Dallas, Texas, and the Ice Cube Gallery in Denver, Colorado. Lehene is the winner of the 2010 McNeese National Works on Paper Exhibition, of the 2007 edition of Positive/Negative National Juried Exhibition, and he received an award from the 7th Dave Bown Projects Competition. His collaborative book with poet Matthew Cooperman, Imago for the Fallen World, was published by Jaded Ibis Press, Seattle, in 2013. Lehene holds an MFA degree in Painting and Drawing from Southern Methodist University, Texas, and a BA in Economics from Babeş-Bolyai University, Romania. He also studied art at the University of Art and Design - Cluj, Romania. Currently, Lehene teaches in the Department of Art and Art History at Colorado State University.

Visitor parking areas on campus are free, and parking at the Creative Arts Center is unrestricted on weekends. A dedicated parking space for galleries patrons is available in Lot 13. For more information, please visit www.wright.edu/artgalleries.

I build my recent works as multiple images woven together layer upon layer to open up interfering visual worlds. These works reflect an interest in describing simultaneous locations/positionings and in multiplying the point of view to make relative its importance, possibly to disintegrate it entirely. The physical process of making, in which an homage to Jack Whitten is implicit, yields an ambiguity that I consider the proper medium of my work. Source-images come from the three cultural environments that contribute to my flaky sense of identity (Romanian, North American, and Indian); issues of memory, history, identity, absence, transience, and discontinuity appear in and motivate the work. I am interested in layering because it encapsulates time and is ambiguous in its oscillation between revealing and obscuring. The visual accumulation comes from and addresses an awareness of the perpetual re-orientation, re-interpretation (including self re-interpretation) that is typical of the immigrant experience I belong to. The canvas, as well as what happens on it, becomes a space without place that reveals meaning only when set in motion, shifting from one thing to another.