A week ago, a Clinton victory in the Democratic primary appeared inevitable. Hillary Clinton had won a number of southern contests by large majorities and was nearing “presumptive nominee” status. Even Bernie Sanders admitted that his campaign “got decimated” in South Carolina a few weeks ago. But this scenario might have changed last week, when Bernie Sanders pulled off a shocking upset in Michigan. In fact, Nate Silver called the results in Michigan “among the greatest polling errors in primary history”. This surprising victory has energized the Sanders campaign. So was the Michigan result an aberration or a sign of deeper Sanders’ support and momentum in the Midwest?

This answer may lie in Ohio’s Democratic primary today.

We have to go back to 2008 to examine the last contested Democratic primary in Ohio. Hillary Clinton defeated then-Senator Barack Obama with 54 percent of the vote to Obama’s 44 percent. That election was similar to the current race in three ways: 1) the president was term-limited meaning both parties were conducting competitive primaries, 2) only 2 Democratic candidates were still running by the time Ohio voters went to the polls in early March and 3) Hillary Clinton was on the ballot. But there are also distinct differences: 1) the GOP race was largely settled, so attention was focused on the Democratic race evidenced by voter turnout that was twice as high compared to the Republican contest in Ohio, 2) if the polls are correct this time, Clinton should win, but it will be based on an entirely different coalition of voters. The map of primary results in 2008 displays circles proportional to the margin of victory for each candidate. 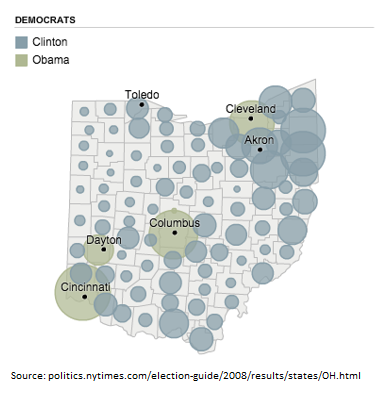 For example, some of Clinton’s most lopsided victories were in counties surrounding the Cleveland area in Northeast Ohio. Meanwhile, Obama won by wide margins in Ohio’s three largest cities.

"All of this just underscores the fact that African Americans are making the real difference for Clinton. When Obama ran in 2008, claiming large majorities of African-American primary voters and caucusgoers, that meant that a large (over 20 percent of Democrats) and enthusiastic portion of the Democratic electorate was simply unavailable to Clinton. Her years of seeking to appeal to African-American leaders and voters are clearly paying off for her this year."

So with Clinton growing her coalition, how can Sanders pull off an upset in the Buckeye State? The answer appears to be by mobilizing young voters and by stealing the support of the white blue-collar workers that voted for Clinton en masse eight years ago.

How unlikely was a Sanders victory in Michigan? Well, the campaign celebrated their victory in Florida, as they had moved on in the campaign with no expectation of a victory rally in Michigan. Clinton had an average lead of 21 percent in the polls in the final days before the Michigan primary. So why were the polls so inaccurate? And what could this mean in Ohio (a state with a similar demographic profile and primary rules)?

Polls designed to predict voting behavior are complex. Pollsters are not only charged with contacting a probability sample of citizens, they are also trying to determine who will actually participate. As voters become more difficult to contact, many polling firms are forced to make judgments based on previous results and behavior. Democratic primaries are especially difficult because minority and youth voters make up a large portion of the electorate and happen to be the most difficult to contact (no landlines, more transient, etc.) forcing pollsters to weight surveys to make up for hard-to-reach respondents. On the other hand, older and white voters with landlines are a dime a dozen, allowing pollsters to make precise estimates about their voting intentions. Meanwhile younger and more diverse voters are difficult to reach and force pollsters to rely on fewer voices to make conclusions about behavior (this leads). Because Bernie Sanders is especially popular with younger voters, pollsters underestimated both the youth turnout and his dominance among voters aged 18 to 29.

Beyond the youth vote, Sanders has an anti-trade message that he believes will resonate in the industrial Midwest. In a campaign that the LA Times called “Michigan on Steroids”, Sanders will contrast himself to Hillary Clinton by pointing to his record of voting down free trade deals and focusing on other issues important to blue-collar workers such as economic insecurity and stagnant wages.

Consider the Contest: Will Operation #NeverTrump and an Ohio Governor on the ballot affect Turnout?

One point I failed to make in yesterday’s post is that turnout has been remarkably high for the Republican primary. This “enthusiasm gap” is similar to the Democratic primary in 2008. But there is one significant difference: Donald Trump has drawn both new supporters and passionate opponents united under the #NeverTrump banner. The #NeverTrump coalition spans from conservative talk show host Glenn Beck to moderate Republicans and even Democrats more interested in voicing their opposition to Trump than voicing their support for either Democratic candidate. The passion surrounding Trump combined with a popular Ohio governor on the ballot might motivate more Democrats and Independents to vote in the Republican race. Whether lower turnout disproportionately hurts one Democratic candidate over the other is difficult to determine. The latest polls show Clinton leading Sanders by an average margin of eight points. If the pollsters don’t make the same errors as they did in Michigan, Clinton should win the Ohio primary again. But she’ll do so with Obama’s coalition from 2008 rather than her own.

Lee Hannah is an Assistant Professor in the Department of Political Science at Wright State University. He earned his B.A. and M.Ed. from Virginia Tech and his M.A. and Ph.D. from Penn State. He moved to Dayton this past summer and believes he may be the only person that is excited to experience a presidential election in a battleground state. When not teaching or writing, Lee enjoys playing tennis, playing guitar, and exploring Dayton. You can read more about his research and teaching on his personal website www.aleehannah.com.

Lee would like to thank Amanda Parks, Kevin Reuning, and Anne Whitesell for their helpful feedback and comments.