Ohio voters will get the opportunity to weigh in on the 2016 presidential nominee tomorrow, Tuesday, March 15.

The value of winning Ohio carries symbolic importance for both parties. As a national bellwether, candidates can use a strong showing in the Buckeye State to assert that they are a national contender. Moreover, the winner-take-all rules in the Republican Party make Ohio one of the most valuable prizes in the primary to date, giving the winner 5 percent of the total delegates they need to get to the 1,237 delegates needed to win the election.

The Republican Party changed its primary rules after 2012 by granting states more discretion in choosing the system they use to allocate delegates. The states have implemented a number of systems:

Ironically, the Republicans changed the rules in order to choose a nominee quickly, with the expectation that the nominee would not be as polarizing as the current front-runner, Donald Trump. Moreover, the GOP hoped that quickly winnowing the field would give the candidate a longer window to prepare for the general election.

You can read a thousand think pieces online about why this didn’t go as planned.

On March 15, Ohio and Florida will award all of their delegates to the candidate that simply wins the plurality of votes. Trump currently has a lead in the polls of 18 points over Florida-native Marco Rubio and 22 points over Senator Ted Cruz. Meanwhile, Ohio polls show Ohio Governor Kasich and Trump in a dead heat. For these reasons, all signs are pointing to Ohio as ground zero for the anti-Trump forces.

So what can we expect in Ohio on Tuesday and what will the results from Ohio clarify about the broader Republican race? First, Governor Kasich is strongest in his home state. This is unsurprising given that he’s won two statewide campaigns and several Congressional races. He currently has an approval rating of 62 percent and is approved by an even higher 83 percent of Republicans. Second, Rubio’s campaign has encouraged supporters in Ohio to back Kasich. These two candidates are drawing from a similar constituency and have probably spoiled a few statewide races for each other, so Rubio’s explicit message might bolster Kasich’s numbers. Finally, Tuesday’s results will provide more clarity, and perhaps finality to the race, which has dissolved into Trump versus the field.

The graphic below shows the distribution of votes that the candidates have received in the 20 states that have voted so far. Support for Trump is robust and averages around 35 percent in each state. Meanwhile, results for Cruz, Rubio and Kasich dramatically fluctuate between state primaries. The question remains whether any one or combination of these candidates can continue to hold Trump at 30 to 35 percent or whether his support will start to creep closer to 50 percent. There is evidence that his support is deep but not growing. 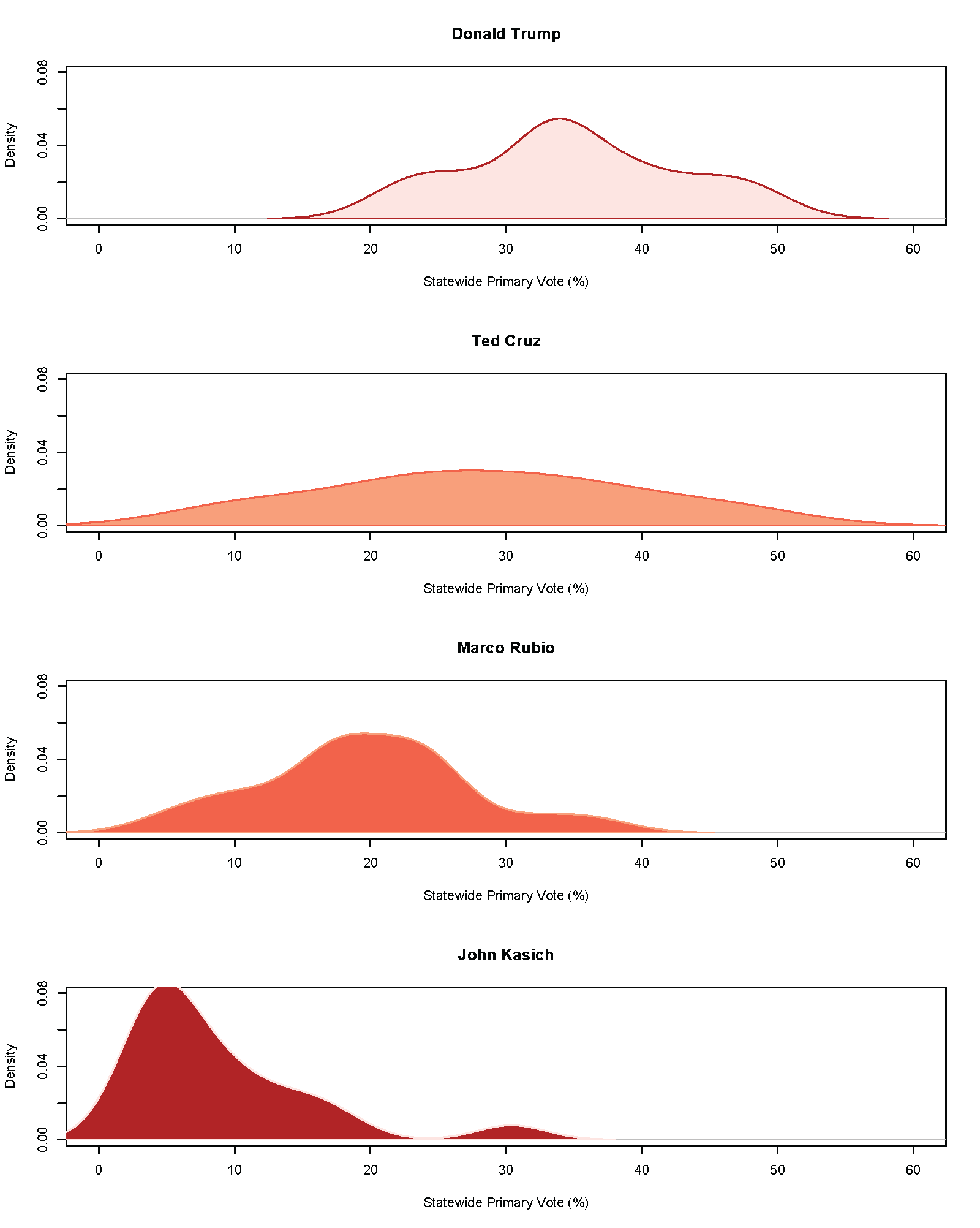 Perhaps results from the 2012 GOP primary can shed light on the 2016 race.  Mitt Romney narrowly won the 2012 Ohio Republican primary by less than one percent over Rick Santorum. As the map shows, Romney (blue) was most successful in the urban areas while Pennsylvania-native Rick Santorum (red) won many of Ohio’s rural counties. The exit polls reveal that Romney was most successful with many of the same voters that are expected to support Kasich. In particular, Romney voters cited electability as a primary reason for their vote. Meanwhile, Santorum drew wide support from evangelical Christians and rural voters. The rural-urban divide between Kasich and Trump supporters should be similar to that in 2012.

Yet there are distinct differences from 2012 to 2016. First, Romney was a heavy favorite to win the nomination by the time Ohio voters went to the polls in early March. Meanwhile, Kasich is far behind in the delegate count and in the latest national polls. Moreover, while Romney won the vast majority of college educated voters, he also split the vote with Santorum among voters that lacked college degrees. Santorum’s campaign was dependent on winning blue-collar support and Romney did just enough to stop him. Donald Trump has performed significantly better with voters without college degrees. In the recent Michigan election, Kasich performed marginally better than Trump with college-educated voters, 30 percent to 27 for Trump. However, Trump won 46 percent of the voters without a college degree compared to 19 percent for Kasich. Kasich will need to close this gap in Ohio in order to win on Tuesday. But the lessons from 2012 and even from Michigan may be limited. With John Kasich as a popular governor in his home state, and with the ever-unpredictable Trump candidacy, all bets are off.

Lee Hannah is an Assistant Professor in the Department of Political Science at Wright State University. He earned his B.A. and M.Ed. from Virginia Tech and his M.A. and Ph.D. from Penn State. He moved to Dayton this past summer and believes he may be the only person that is excited to experience a presidential election in a battleground state. When not teaching or writing, Lee enjoys playing tennis, playing guitar, and exploring Dayton. You can read more about his research and teaching on his personal website www.aleehannah.com.