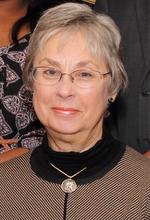 Judy was involved in the field of philanthropy for over 32 years – 17 years with The Dayton Foundation achieving the position of Executive Vice President and subsequently 15 years as Executive Director of Kettering Family Philanthropies.

In 2002 she was awarded the Outstanding Alumna Award and has served on the Dean's Leadership Board and the Leadership Scholarship Sub-Committee since 2003.

Judy continues to be active in the community by serving on several boards and committees.  She has been married to her husband, Thomas, for 52 years.  They are the parents of two, grandparents of five, and recently became great-grandparents.