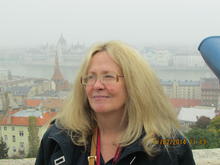 The child of  Hungarian immigrants, Ildiko' Marcus grew up bilingual, surrounded by a rich cultural heritage. While attending the Ohio State University, the opportunity arose for her and her former husband to open a Domino's Pizza franchise in the Dayton area. As the business prospered, mindful of her parents' advice that "no one can ever take an education from you," she continued her education at Wright State.  Ildikó graduated magna cum laude in 1979 with a B.A. in Latin as well as a B.S. in Nursing. Having had a wonderful fulfilling career in nursing, she also enjoyed many hobbies, including worldwide traveling, TSD/ Pro rallying, skiing, playing bridge and maj jong, as well as gardening. Her passion for roses led her to become an American Rose Society accredited rose judge.

Ildikó has long believed that the pursuit of higher education is of the utmost importance. Both of her daughters, Andrea and Lauren, also heeded their grandparents' advice and went on to get advanced degrees. She strongly feels that the humanities bring the spark that is the essence of a well-lived life. To that end, she has not only been very supportive of Wright State's College of Liberal Arts by serving on the Dean's Leadership Board since 2006, but has also supported all forms of the arts throughout her life. Marcus lives with her husband Dan Coughnour and their cat Chester in Xenia Township.